OK, here's the deal, they aren't especially when you are just starting out, they don't need to be.

They were running practice at Perris yesterday and a few guys from the crew of sporty flat track racers in so cal went out.

I'll give you a basic run down on their four bikes.
They all have one thing in common, i'll get to that later. 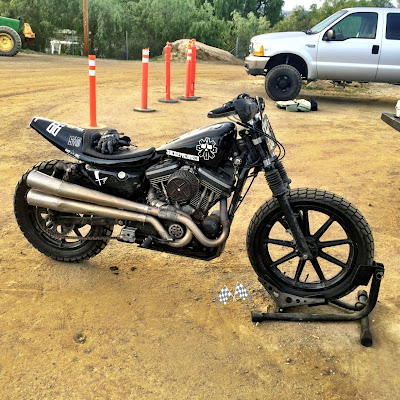 This is a killer little bike.  Mind you, he has a custom tank and tail on it and fancy pipes but other than that stuff. Its not that far from a stocker.  It runs great and is a killer way to go.  he could put his lights and mirrors back on and its an instant street bike.  Supertrapps and the free flowing air cleaner round it out.
2. Wiggins Bike. 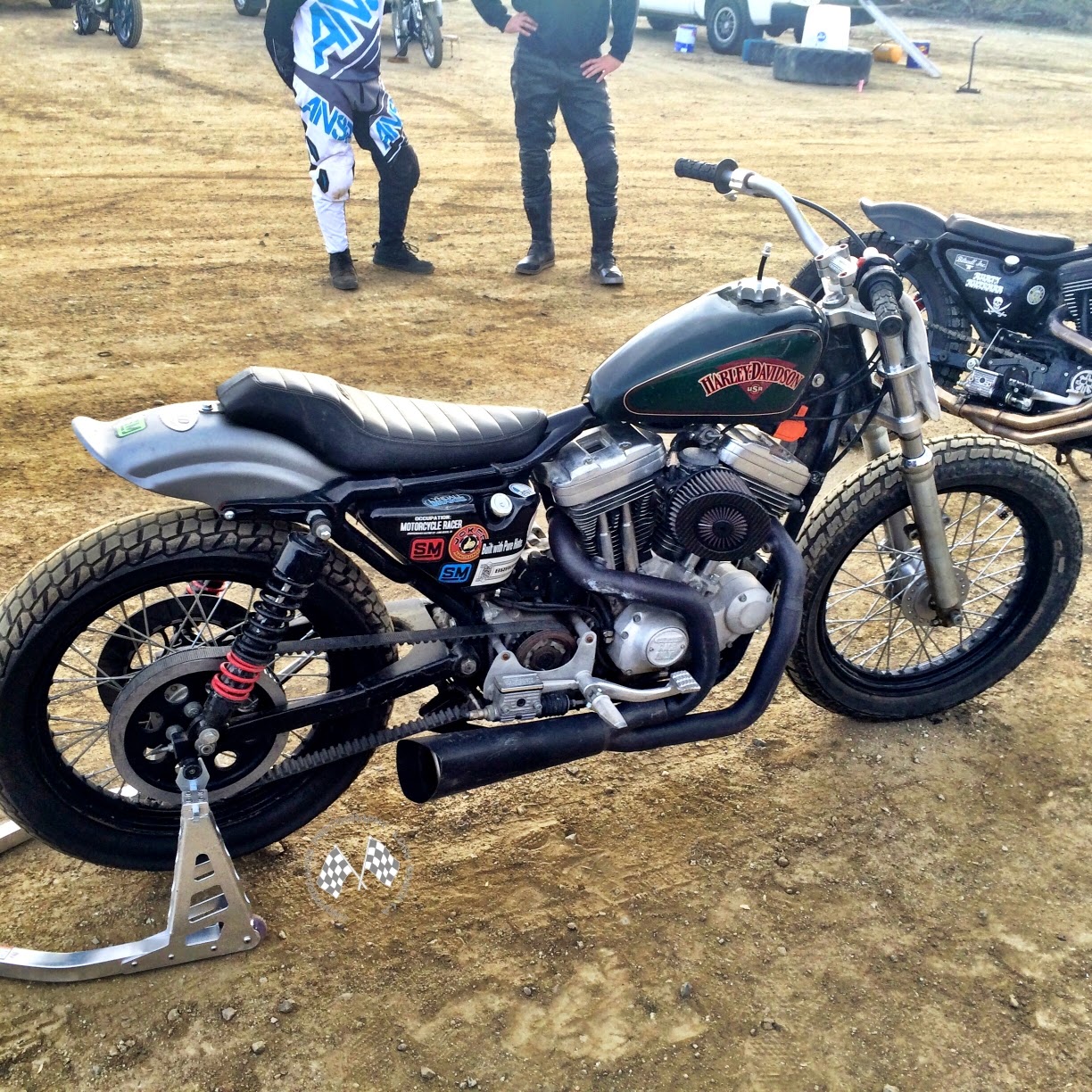 Chris's bike is even closer to stock,  The small tank, off the shelf Vance n Hines pipes and air cleaner keep air flowin in and out.  The rear fender is a Lowbrow Tsunami unit, pretty sweet piece actually, I think it comes in there tracker kit. Shaun above has his converted to a chain, but as you can see by Chris' bike the belt works too.
3. Mark from Rusty Butcher's bike. 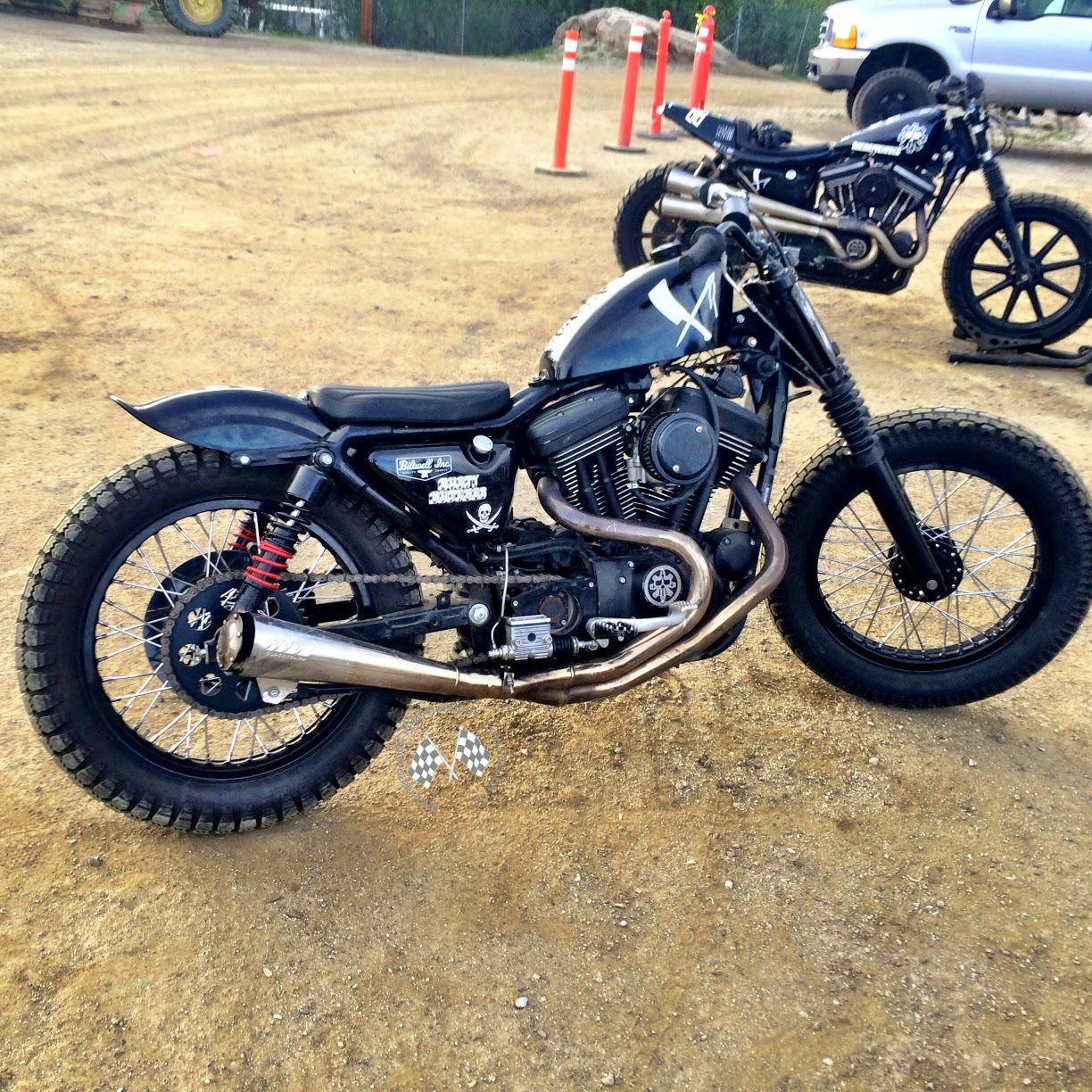 Another sporty with the Lowbrow rear fender.  another supertrapp.  It seems that the "Better" pipes out there always end up at the swap meets.  They arent "Biker loud" enough for most people. But they perform great.  Mark is also running a chain (Makes sprocket changes easier, with a belt you got what you got)  Like Chris' bike.  Throw some lights on it, like he ran at Costa Mesa flat track last year, and its a street bike.
4. Jason McCann's bike 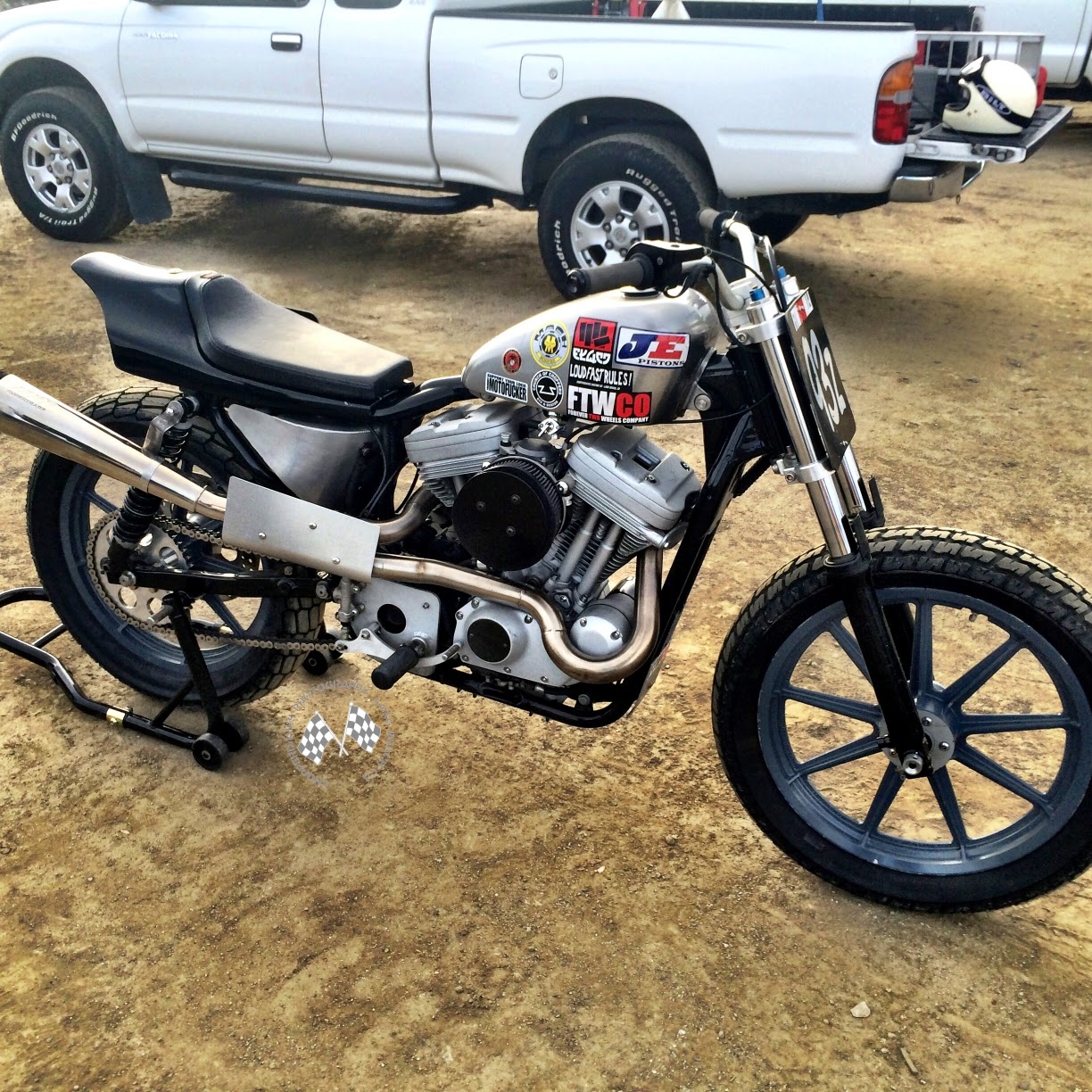 Jason's is the moat heavily modified one of the bunch, but at first glance you wouldnt know it.  He built it originally as a street bike and now once he got severely bit by the flat track bug, I am sure it will never see the street again.  He made his own oil tank, tail section, head pipes and a bunch of other small stuff.  But when it comes down to it, its still pretty close to stock.  Ok I forgot it has a yamaha R6 fork with Weiss trees too..  ok so it has alot of custom stuff.  Jason is also my official Chopperdaves Casting Co sponsored racer, so I'm biased!
Here's the thing about these bikes.  They are stripped down stock sportys with a few parts that just plain work.  You can do it however you want.  1991-2003 Harley Sportsters are built to be ridden and raced.  The motors can be left stock and they work just fine.  On top of that they are basically bulletproof if you take care of them.
BUT there is one thing about all 4 bikes above I haven't mentioned yet.  The ONE thing they all have in comon.  The rear wheel.  They are all running 19" wheels.  Why you ask?  Because the 19 is the best tire for flat track racing.  Its pretty easy to make the pieces or buy them to put a front 19' mag on the back.  and if you have a bike with spokes, its not a big deal to re-lace it to a 19" rim.  Now, that doens tmean you HAVE to, The Pirelli Scorpion is a dual sport tire that works OK in its 16" form,as whell as a 19".  so you can  get on the track with just some tire changes.   When you get 19" wheels front and rear you can get real flat track tires, Maxxiz , Mitus, Goldentyre, dunlop, etc...
So keep your eyes open, sportys are cheap.  There are a ton of people out there that will help you get your bike set up for racing.
So what are you waiting for?
Share Tweet Pin

BORN FREE 9!! Always our favorite event.. Mike & Grant put on a amazing show. This year they even added a rad race at Costa Mesa Speedway. The race went off without a hitch, awesome team and ev...

The first ever Trackercross brought to you by myself was on April, 29th, 2017. I had one major goal with this event, make sure everyone leaves with a smile. I think I ended up achieving that. Today...